August - Surprise - Oil on Canvas 51x46cm. The hydrangeas arrived unexpectedly like so many things in life. The painting is about enjoying the unforeseen.

July - Abundance - July has been a month of continued rampant growth. The rose I picked for the painting was way above head height; the sunlight strong, counterbalanced by the shadows cast.

June - Luminosity - In a month with so much rain it has been a time for burgeoning growth. Things seemed to shine, even the humble flowers of comfrey seem to shine like stars and give an aura to surrounding memories.

May - Now and Then - Oil on Canvas 41 x 51 cm. May was a wet month, the wild flowers spectacular. After a dry April the abundance of water brought everything to life. The shadows of the past are in the background but the focus is now.

April - History - There is a history to memory, aspects fade and others emerge as important. Here the tulip leaves continue to dance after the flowers had faded. Other histories of objects merge to inform the image.

March - Intimations - The first blossoms of spring are a promise of warmer weather to come while shadows of the past merge into the background. The sharpest focus is on the jar of water.

February - Echoes - oil on canvas, 50 x 30 cm. The painting represents echoes of the past, gaps and resonances in the context of reawakening life symbolised by catkins, emerging buds and snowdrops.

This is the first painting, (oil on canvas, 50x30cm) of a series of still-lives, one to be completed each month. This painting includes flowers that have survived from last year till January accompanied by a jar that first featured in a still-life from 1968.

Sun Dial at the Foundry in Wax prior to casting into bronze 2020.

Tuesday 10th November 2020. The Mayflower sailing ship that stands at the bottom of the High Street in Billericay. 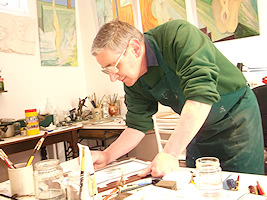 John Doubleday was born in 1947 and studied sculpture at Goldsmiths College. Since his first show at the Waterhouse gallery in London in 1968 he has enjoyed more than 30 one man exhibitions in Britain, America and the Continent.

John Doubleday's work can be divided into two distinct categories: commissioned work and the paintings and sculpture produced for exhibition. Of the two categories it is the exhibition work which is the obviously more personal. Marina Vaisey of the Sunday Times wrote: "His isolated figures have a logic of their own, which we as spectators can readily accept. By making his world he enhances our own… Though the objects are made of physical elements of the human figure, often distorted, his work also appeals on a sensual plane, and to the irrational quality of our submerged dreams."

His enthusiasm is touching and the fertility of his object making is disarming. The various aspects of the direct and indirect appeal of his work, physical, emotional and intelligent make what he has accomplished of lasting value. Unafraid to experiment, John illustrates an interest of the figure with the landscape. Sometimes one is able to see ghost like figures walking through the landscape, suggesting both are inextricably linked.

John lives and works in Great Totham in Essex. His interests include raising Essex Saddleback pigs.