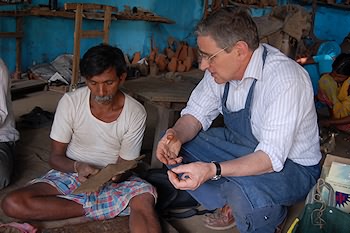 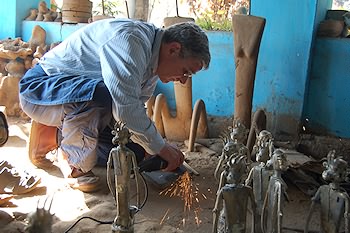 In 2010, at the invitation of Bhalu Mondhe Cultural Advisor to the State of Chhattisgarh John Doubleday undertook a self funded residency in India. Having spent many years making significant public sculptures cast in bronze, this was an opportunity for the artist to explore his medium of choice in a completely different way. John spent four months in India with the objective of spending time with the Bastar metalworkers who still use the cire-perdue process which has an unbroken tradition stretching back to pre-history. The experience had a profound impact on John personally, as well as his work. The resulting pieces documents an artisanal exchange between two different cultural traditions. It testifies to an intuitive understanding of materials and the acceptance of artistic vision in a global context.

The first narrative that the exhibition develops is John Doubleday’s interest in exploring the living tradition of bronze casting amongst particular tribal communities in India. The second is the artist’s personal response, as an outsider, to the experience of India; an experience encouraged by his son who had worked in the M.Y.General Hospital in Indore. The exhibition is an exploration of his own shifting artistic presence, and illustrates this in his documenting, learning from, working alongside and being guided by practitioners of an unbroken line of indigenous skills, not recorded but rather passed on from generation to generation, fingertip to fingertip. During his residency, John kept a journal of his experiences including extensive observations of the traditional processes used by artisans representing 'the living bronze age’, and intends to make a film of general interest which showcases the skills of the artists working in a fragile artisanal-environmental milieu and provides a contextual backdrop to the touring exhibition.

"The older generation of craftsmen, with whom I worked in Kandagoan (Chhattisgarh) were simply astonishing. Their social context is remarkable. Whilst they ‘enjoy’ a romantic place in the Indian cultural imagination, in practice, they are exploited and desperately poor. There are still people who know how to harvest the beeswax needed for casting. They use anthill earth, cow dung and rice chaff. Sadly the metal is now mostly recycled tribal artefacts and alternatives are now creeping in at each stage of the process, for example finishing can be speeded up by the use of welding and power tools. While it is folly to stand in the way of progress, their way of life tells a fascinating story which could be made accessible to a wide audience."

Preparations are underway for a touring Exhibition of the work produced in India. Funding is currently being sought for an accompanying film by Tessa Livingstone www.tessalivingstone.co.uk documenting the life and work of the Bhastar metal workers.